One of the places I enjoy exploring is Lake Wales Ridge State Forest in Polk County. Some of my early days as Florida Trailblazer were spent there so it is a place I like to return to when I can. I initially learned about how the area was a chain of islands millions of years ago when the rest of Florida was covered by ocean. It is known as the Central Florida Ridge today, the ridge runs for about 150 miles through central Florida, Lake Wales Ridge standing 295 feet above sea level, is the oldest part of it. As you walk along through areas where the scrub habitat are you are literally walking on an ancient beach.. The forest has a many areas of diverse habitat though with many miles of trails and places to explore.

Besides the enjoying the amazing wilderness here I have been learning a lot about the history as well. Some of it can still be seen today if you know where to look. One of the areas I found was an abandoned railroad grade, in fact some of the trails cross over it but today it just appears as another forest road so you may not know that it was a railroad line at one time. Once I found it I hiked along the grade for a few miles until I reached a creek where a bridge once was. The bridge is mostly gone except for the wood pilings that supported it. It was neat to see this reminder of history out here though. I learned that the railroad was built around 1944 to connect Avon Park Air Force Range with the existing railline in Frostproof. This line was discontinued in not to long after in 1948 and was dismantled. I would like to explore more in the area to see what else may be there that could be associated with the railroad.

Out in The Boonies – Arbuckle Tract 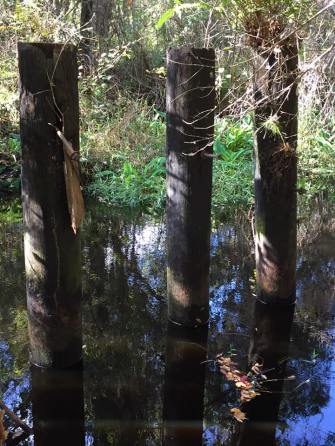 Remains of a Railroad Trestle

Remains of a Railroad Trestle