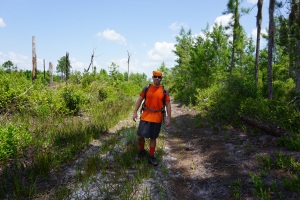 After learning about the ghost town of “Acron” in Lake County I went out to the area to try to find the townsite and see what could possibly remain. According to some maps I found that the location is just north of Paisley in the Ocala National Forest area. It was challenging trying to narrow down an area to cover since it is a large area, I didn’t really know where to begin.

Thinking back on the research and knowing that the town had a sawmill the site would’ve been close to water or a transportation line of some kind. So I looked for old roads, railroad lines or water areas to explore around. Another part of the research also indicates that the town had several spellings for its name. One of them was “Akron” and with this clue I narrowed down my search to around Lake Akron which was nearby. There are a maze of dirt roads in the woods there I picked one that lead me to the lake.

Along the way I managed to find some possible evidence from the townsite. In one of the clearings I saw a lot of old bottles and glass scattered about. I followed the area further in where I saw bits of ceramics, metal, wood and even and old license plate on the ground. It was obvious that I found a site related to the town just not sure what it was. I didn’t see any structural remains or bricks like I have at similar sites but I still have more to explore here.

Here is more history on the town:  John C. Campbell was the first postmaster when the post office was established in 1877. Acron originally had a population of 30 but grew in time to 300 residents. The Acron School was established in 1875 with Sara Campbell as its first teacher, Flora Call was the second. Flora was the mother of Walt Disney. This two-story log school also served as a church house and local Mason meetings. Campbell housed the post office in his home which for a time was also used as the local hotel. The original Campbell home was demolished in 1910. The community has since disappeared. Pioneer family names consist of Campbell, Lever, Perkins, Blecha, and the Rev. Charles Jarvis Clark.

Exploring The Ghost Town of Acron in Lake County 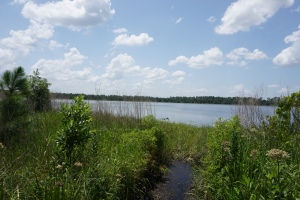